Located just over 100 kilometers north of the city of Aurangabad and tucked within the region of northern Maharashtra, the Ajanta Caves is inscribed as a UNESCO World Heritage Site. This fascinating set of caves has taken its name from the neighboring village of Ajanta, which lies 12 kilometers from the site.

The caves, which serve as one of the most outstanding attractions in all of India, were discovered accidentally in 1819 during a hunting trip by an army officer interestingly named Captain John Smith. Today, Ajanta is not only a popular tourist site, but also very important in understanding the extensive Indian history. 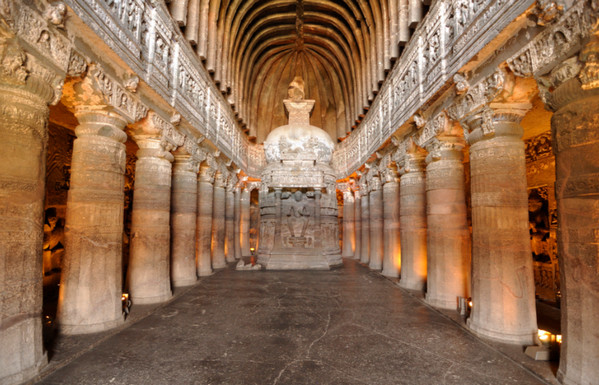 The caves are located in a bend of rock surface, which is shaped like a shoe and is perched at a height of 76 meters overlooking a stream linked to the Waghora River. Ajanta is a sacred Buddhist site, with monks retreating to this place because of its natural serenity. Despite being a collection of caves, each cave was not excavated all at once. In total, there were 30 excavations made.

The group of caves were then distinguished into two major groups. The first set of caves became Buddhist monuments around the 1st and 2nd centuries B.C. The second set’s Buddhist history goes back to a younger period of 5th to 6th centuries A.D. At this time, the Gupta Dynasty ruled the land and spearheaded what is known today as India’s golden age.

Ajanta is considered by many experts, as the birthplace of Indian art. The walls of these caves are covered with the most excellent examples, and longest surviving murals and sculptures. The wall paintings on these spectacular caves mostly depict the life of Buddha. They are hailed as some of the finest Buddhist religious art masterpieces the world has ever known. 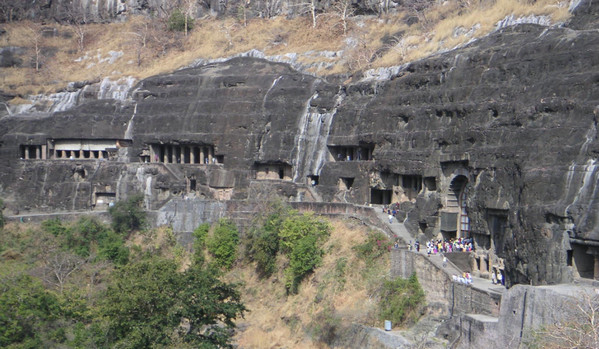 Despite being very old, most of the paintings in the caves are kept in good condition. Thus, giving the younger generation the opportunity to learn more about the role of Buddhism in the region and the progress of Indian art during these centuries. Arguably the most prominent of all these caverns is Cave 10, which was the first cave Mr. Smith walked into. Cave 10’s prominence is due to its age (dates back to the 2nd century) and for housing the oldest surviving painting of the life of the Buddha.

The closest airport to the Ajanta Caves is the one in Aurangabad. From here, you can hire a taxi to take you to the attractions. The nearest railway station to Ajanta is the one in Jalgaon, which is about 1.5 hours from the actual site. It is possible to hire a car from the nearby towns and drive to the caves. 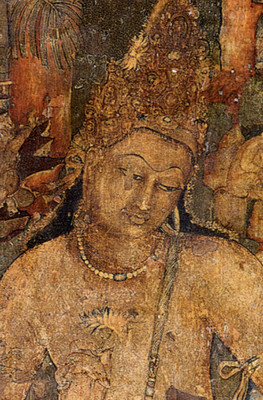 Ajanta Caves welcomes visitors every day except Monday, from 9 am to around 5:30 pm. The site is still open during national holidays but it can get really busy. The admission fee of 250 rupees for foreign visitors will allow them to gain access not only to Ajanta but also its sister cave system named Ellora. Accommodation facilities can be found in Ajanta town, the Ellora area, Jalgaon town, and in Aurangabad. You can reach the caves by walking up the road that stretches along a terrace in the middle of the cliff. Each cave one has its own flight of steps, connected to the stream.