Looking a great mountain escape? Away from the chaos and modernity of the lowlands? Make your way to the Svaneti Region of the Caucasus, Northwestern Georgia; and you will find what you are looking for and so much more.

This region is absolutely so stunning you may not want to leave – ever. Its natural gifts, which include Europe’s highest mountains and incredible glaciers, are well complemented by the presence of medieval villages, old houses and towers. Svaneti is home to the Svans, known for their chivalry and bravery. The whole mountain region covers an incredible amount of land. So much so, it is divided into two regions: Upper Svaneti and Lower Svaneti. It will take multiple days to satisfactorily enjoy both sub-regions, but the time spent here is well worth it. 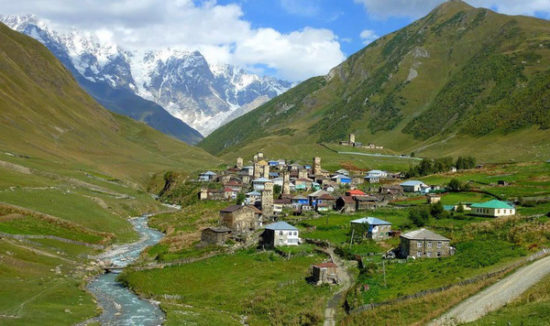 Svaneti has earned the World Heritage Site distinction of its magnificent landscape that features well preserved human settlements built way back during the medieval times. You can begin your journey around Svaneti in its capital Mestia, which also has it fair share of the iconic stone house towers. These house towers were built in such a way as to not only act as homes to villagers but also as defense posts against potential invaders. If you want to see almost 200 hundred of them up close, head out the village of Chazhashi and you will not be disappointed. Make sure to have your camera with you.

Hiking is one of the main activities in this mountain region. Hardcore trekkers travel from one town to another on foot. This is a great way to really enjoy the scenery. The most popular hiking path has got to be the one starts from Mestia and ends at Mazeri. Along the way, you will pass through several villages, some of which are situated on the Dolra River basin. While conquering this track, you will be visually rewarded with the sight of the Ushba-Mazeri massif, considered to be one of the most inaccessible mountain massifs in the Caucasus.

Take note that although you get some information at Mestia about this path, there is no guarantee that you can get a copy of the map. The mountain village of Mazeri is known for its beautiful natural landscape. The village is the usual gateway to Mount Ushba, which is a prominent trekking spot and is one of the highest mountains in Europe.

Tviberi River Valley is another popular hiking route in the Svaneti region. This route starts from the Zhabeshi village and goes all the way to two spectacular glaciers, the Qvitlodi and Tviberi. The trail is perhaps one of the easiest, featuring a length of 5.5 kilometers but with elevation of only 730 meters. Because of the relatively level elevation, it usually takes 6 hours to walk it.

If you do not feel like hiking the whole way through, then why not go for zhabeshi-ushguli horseback trail, which starts at the Mulkhara and Adjaristsqali River and leads you to the village of Adishi. The journey does not stop here. You will proceed past some quaint charming villages like Iprali and Khalde, until you arrive at Ushguli. What makes Ushguli so desirable and inspirational is its unbelievably scenic surroundings. In fact, many argue that is the most picturesque of all Svan villages, primary because of its location, which is the bottom of the highest mountain in Georgia.