Chicago is considered by experts as one of the United States’ most bike friendly cities. Maintaining hundreds of miles of paved car-free lands, the wind city definitely proves it deserves this distinction. Along with its many attractions, its lakefront area has been luring in visitors from all over the world because of its numerous paths that provide access to the city’s most precious landmarks. One of the most prominent trails in the city is the Lakefront Trail, which is hailed by enthusiasts as the ultimate urban cycling path. Pedaling along this trail is a healthy, environment-friendly and adventurous way of exploring Chicago.

The Chicago Lakefront Trail features a fully paved path that stretches for 18 miles. It was built by the Chicago Park District, who has also been managing it since its opening. Although it is perfect for cycling, the trail is also used in different ways. The fact is you can choose how you want to enjoy the trail. You can hike, rollerblade, skateboard, run or take a leisurely stroll on it. And because there are thousands of people that use the trail for various reasons; you will mostly meet and make friends with some awesome like-minded folks. 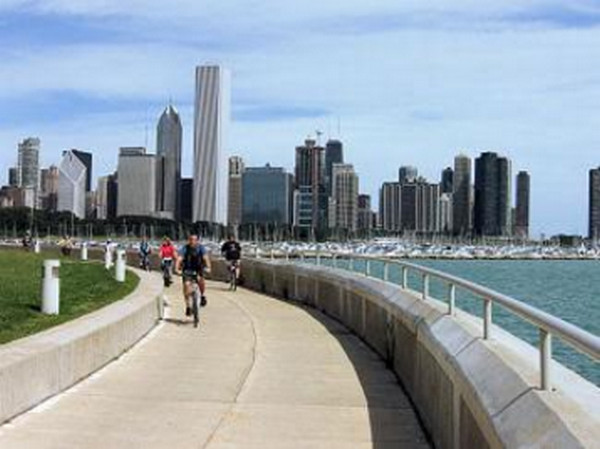 You will never be bored following the Lakefront Trail as there is always interesting places to stop at along the way. The trails connect to prime attractions like North Avenue Beach, Millennium Park, Museum Campus and the Lincoln Park Zoo. In addition, the trail gives you a front seat view of the spectacular Chicago skyline. Some of the popular skyscrapers that you can marvel at include the John Hancock Center, Aon Centre and Willis Tower, which is one of the tallest building in the country. Aside from the skyscrapers, the city’s extensive shoreline, including the shimmering waters of Lake Michigan, are also highlighted.

You can begin your lakefront adventure by going to Navy Pier, which houses the impressive Navy Pier Ferris Wheel and the Chicago Shakespeare Museum. After exploring this section of the trail, head south to reach the Buckingham Fountains, and the Shedd Aquarium. Another important landmark you can visit is Soldier Field, home to the Chicago Bears.

If you decide to walk north of the Navy Pier, the trail will lead you to Oak Street Beach, a relaxing place to sit and relax. If you adore nature, the trail also leads you to beaches, gardens, natural sanctuaries and parks. Recreational areas like sport courts, playgrounds and fields are not far behind. This ultimate urban trek will familiarize you with several neighborhoods in the city. Examples of these vibrant neighborhoods include Lakeview, Uptown, South Loop, Edgewater and Hyde Park. 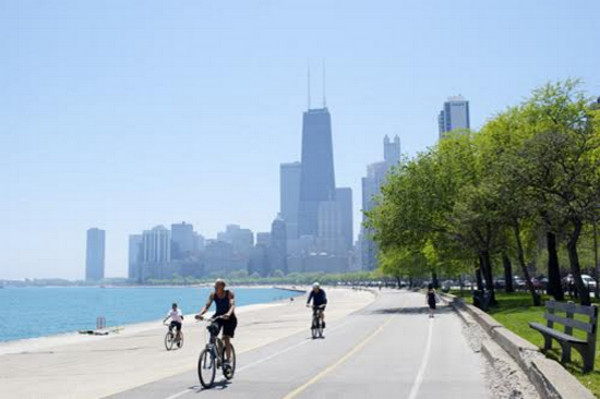 Safety should be the main priority for anyone using the Lakefront Trail. That is why park services set out pertinent rules that all trail users must strictly follow. If you decide to bike on the trail, make sure to wear protective gear and reflecting materials at night. Signaling to others is a requirement and passing is always on the left. Pedestrians on the trail have the right of way.

You can find the Chicago Lakefront Trail on the east of Lakeshore Drive. Parking and toilet facilities are available along the trail. You have the choice of parking in garages, on the street or in parks. But take note that finding free parking is especially a challenge during warmer sunny weekends.

**Authors note: Unfortunately, America has its own unique form of Domestic Terrorism. Chicago, as with most major American cities, is rampant with guns. The resulting violence increases every year. Until local, state and federal governments move to ban all guns, except for members of government authorized law enforcement agencies and militias, we are obligated to advise readers of the inherent danger of visiting cities in the US.