The United States of America is one of the chief destinations on many travelers’ bucket lists. Something about this ever magnanimous country has always enthralled us- whether it is the rich history, the attitude towards work, or the amazing business models. While New York is passionately called the best city in the world by its residents, the capital city of Washington has an aura of its own. 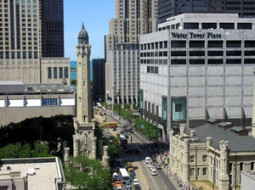 Among these great destinations, Chicago stands out both as a commercial hub and a surprisingly pleasant tourist spot. The combination of business with pleasure has defined this “windy city” with a rich culture, often expressed in writings, music and films. Let’s take a well rounded tour of this “Second City”.

The largest city of Illinois state and bearing the second busiest airport in the world, Chicago has an answer for every desire – be it modern architecture or classical music. The highest point of the city, literally, is the Willis Tower, formerly known as the Sears Tower. With a foot fall of over one million tourists each year, the largest tower in America is a natural starting point in Chicago. Completed in 1973, the Sears Tower houses 108 stories, climbing an astounding height of 1451 feet. The tower has had a turbulent history, starting with its conceptualization as one of the largest buildings in the world and then progressively being transferred from one business group to others. But the tower itself has never lost its charm.

The observation deck of the tower, Skydeck, is one of the Chicago’s major tourist attractions. The unique feeling of the tower swaying against the wind can be experienced here. Tourists can enjoy a magnificent view almost across the whole of Illinois, extending up to Michigan. The building has been a major showpiece in almost every movie set in Chicago.

Moving on to the massive Lake Michigan shore side, we come to Navy Pier. About a kilometer long, the pier has come a long way from serving just as a cargo warehouse to being one of the number one tourist spots Chicago. The navy pier is a multipurpose area, with the majority attraction being it’s Ferris wheel and the dinner cruises by famous tour groups. The pier has a children’s museum, which caters both to children and adults. With future reformation plans consisting of a giant Ferris wheel and monorail with a floating hotel and a water park, the Pier is sure to boost its visitor count over the coming years.

The true essence of a modern city is gauged in its bustling streets. The Magnificent Mile, a part of the Michigan Avenue between Chicago River and the Oak Street, is more than just a street. It is a reflection of Chicago’s true character. Lined with numerous business houses, apartment towers, banks, showrooms along both the sides, the Magnificent Mile (or the Mag Mile) is the most important thoroughfare of the city. It contains an ensemble displaying the true America- everything for everyone. From restaurants to hotels, museums to banks, you name it and you get it, that too, its finest quality.

With a built up area of over 3 million sq. ft. occupied by retail outlets, the street houses popular brands like Bloomingdales, Ralph Lauren, Gucci, and the most popular hotels of the U.S. like the Drake Hotel, theFour Seasons Hotel Chicago and more. In addition, the topmost banks of America like Citibank, Bank of America and JP Morgan Chase’s Chase Bank also have offices here. No wonder that the National Geographic has listed the area among the ten best shopping avenues of the world. The “Gardens of Magnificent Mile” is a display festival held each summer on the Mag Mile, showing true moods of the season. In fact, every change in season is reflected in the changes made in the plantations across the avenue. A marvelous sight indeed, the Mag Mile needs to be experienced with ample time in hand. It is Chicago!