Do you want to witness of the largest most amazing Highland games in the world? Head out to the Cowal Highland Gathering in Dunoon, Scotland. You will not be alone as you join the other 23,000 people who are all excited to experience the intense demonstration of traditional Scottish strength and athleticism. I doesn’t hurt that the games are set in a gorgeous Highland location. 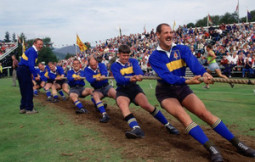 At the annual Cowal Highland Games, you will able to see the best of the best battle it out in various sports events such as heavy athletics and traditional Scottish backhold wrestling. Heavy athletics involve several unique sports events such as caber tossing, Cowal Stone shot-putting and Scottish hammer throwing. The brawny athletes are really competitive and never fail to thrill the joyful crowd. The most unique thing about seeing these sports is that the men participating are wearing that iconic Scottish skirts (the kilt).

But the Highland Games are not only about watching sports as there are other events that display the richness of Scottish Highland and Celtic heritage, making the Games exude a truly distinct atmosphere. There will be grand pipe bands and a strong presence of Ceilidh music at the event. In fact, the Cowal Games is where the world’s best pipe bands compete to win the coveted Cowal Pipe Band Championship, first held in the early 20th century. 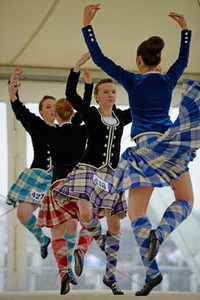 To maximize your experience at the Cowal Games, stay until the end of the Pipe Band Championship, when more than 130 pipe bands gather and play a salute the Chieftain. The bands that are made up of about 3000 drummers and pipers will play “Highland Laddie” in unison, and will march through town. This amazing gathering is the largest of its kind in Europe, and is a highlight not to be missed at the Games.

If the pipe playing is not enough, you can also watch other crowd pleasers such as the Drum Major Challenge, which features adult and junior drum majors showing off their impressive skills; and the Scottish and World Highland Dancing Championship. The Cowal Games will also offer entertainment for the kids and a fun run, making the event a highly suitable destination for families.

Don’t worry about being hungry while watching the spectacles unfolding around you. The Cowal Highland Gathering features a food court that offers a wide variety of local and international cuisine. There will also be food vendors catering stalls all around the main stadium. The organizers will also set up a refreshment tents. One of them is the Patron’s tent, which does not only provide great food but also fantastic views of the arena and the games. The tent is only open for sponsors and patrons. However, it is possible to acquire the patron status at a reasonable rate.

Usually held the last week of August, the Cowal Highland Gathering is performed at the Scottish town of Dunoon, which is easily accessible from Glasgow via public transport. You can drive to the town following the scenic route called A82. There are regular bus as well as train services that leave Glasgow Central to Gourock ferry terminal. From here, you can take the ferry to Dunoon.