Dreaming of a great cycling adventure? Then consider doing La Route Verte, one of the greatest trails Canada has to offer to cycling enthusiasts. 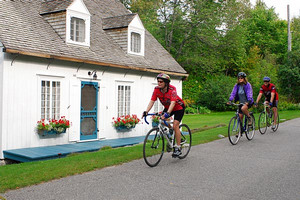 National Geographic also dished out praises for Route Verte, even naming it as one of the top 10 bike routes in the world. Also known as the Green Route, this trail covers over 2,485 miles and allows cyclists to cross the province of Quebec from east to west and north to south. Route Verte rose to fame and prominence because it is easy to follow, well-signed and it leads to several interesting landmarks.

Even novice cyclists can easily do about 50 kilometers with no major issues. The trail sections are ideal for both solo and tandem cyclists. Despite its popularity, La Route Verte does not get too crowded except perhaps when you are coming into the cities. Otherwise, biking in the countryside allows you to cycle long stretches hardly seeing anybody. Thus, tackling some sections of La Route Verte is all about communing with Canadian outdoors and basking in mother nature’s peace and serenity. Following Route Verte is not just an exciting adventure, it will also expose you to gorgeous panoramic views courtesy of the varied Canadian landscapes. 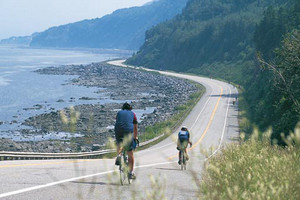 La Route Verte is actually made up of a vast system of criss-crossing bikeways. Thus, you have the option to choose to which paths to follow depending on your time frame. It is a perfect activity that can lasts for a couple of days or even longer. Aside from passing along the stunning shores of St. Lawrence River, you will also get the chance to marvel at the picture-perfect views of the Laurentian Mountains.

Another notable area that La Route Verte sections go through is the Castons Est. This is well-known as tourist region of south-eastern Quebec. Here, you will find a number of camping and ski areas. Following Route Verte can also lead you to the Charlevoix region, which is specifically situated on the north shore of the Saint Lawrence River. The spot promises to be nothing less than gorgeous as it is a designated UNESCO World Biosphere Reserve.

A number of cyclist who choose to follow Route Verde make it a point to drop by the Gaspe Peninsula, located in far eastern Quebec. Just like the Castons Est., Gaspe Peninsula is a big time tourist hub because it is home to many outstanding natural attractions like the International Appalachian Trail and the Gaspe National Park.

Biking La Route Verte will most likely lead you to Quebec’s two main cities, Montreal and Quebec City. The city of Montreal makes an excellent biking destination as it boasts a comprehensive network of cycling lanes and bicycle paths. La Route Verte # 1 in particular, goes through the city center. Aside from abundant bicycle paths, Quebec City also possesses marvelous architecture that will impress any city cyclist.

You can get maps for the different biking sections at many gas stations and bookstores throughout Quebec. Tourisme Quebec also offers a great published guide, giving cyclists important details of the trail sections including a list of accommodation options that line the route. Although signs guiding bikers of the paths are abundant and very much conspicuous, it is still helpful to bring a GPS just in case you get lost.