Situated on Italy’s Salerno peninsula, Paestum is home to some of the world’s best preserved ancient Greek temples. Thus, it is only fitting that this ancient complex has been declared a World Heritage Site by UNESCO, and a top attraction for visitors to Italy.

Paestum will enchant you with its old-world atmosphere and exquisite ancient architecture. It is a ‘must visit’ for travelers who are doing an Italian classical tour! The complex consists of three haunting Greek temples that easily stand out amidst the Italian countryside. In the 6th century, Greek colonists built these temples as well as the city that surrounded them. The city was first called Poseidonia, or the City of Poseidon, and then got renamed to Paestum. 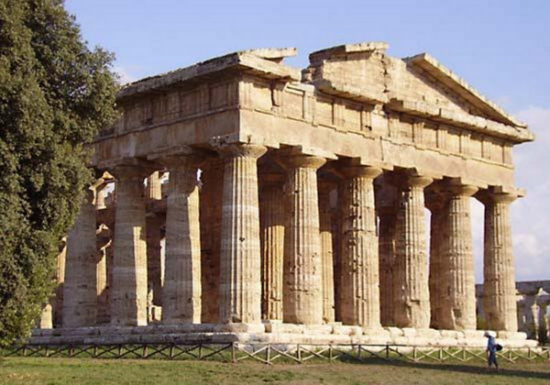 During the 9th century, malaria disease caused massive death and devastation to the population. The survivors fled the city and Paestum was eventually forgotten. After being unnoticed for several centuries, the temples of Paestum were brought to the attention of the public eye in the 18th century, when a road was being constructed through the area. It did not take long for historians and travelers to realize the importance of Paestum Scavi (archaeological site) in human history and classical architecture.

The first temple that proudly stands amidst the remains of the ancient city was originally named the “Temple of Hera” These days, it is often referred to as the Basilica. Built in 530 BC, it is definitely the oldest among the structures at the site. Just beside Basilica is the huge and excellently-preserved Temple of Neptune, which is believed to have built in 450 BC.

The Temple of Neptune is hailed as one of the few most complete Greek temples in the world, and can easily be the highlight of your visit to Paestum. The temple does not fail to impress travelers with its 30-foot high columns, entablature and pediments. The third structure —Temple of Ceres is the smallest and youngest of the three, having been built around 500 BC. You will have to walk a little farther off the main site to see this temple, which boasts 34 intact columns, but the experience is worth the effort. 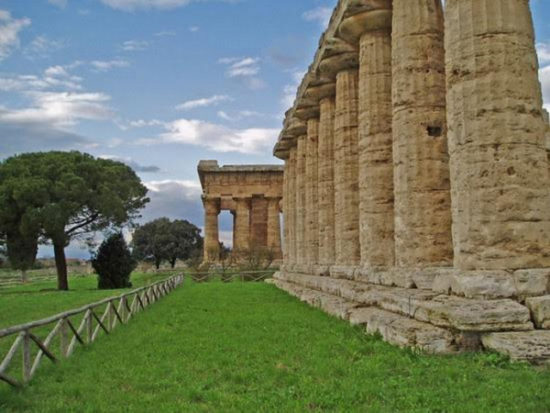 The temple complex is covers a large area of land, so it will take you about two hours to fully explore it on foot. You will find Paestum to be quite scenic as the site is ideally located in a lush rural terrain. Just outside the archaeological site is a street, which is populated by a row of souvenir shops and stalls serving drinks and snacks. Beside the archaeological remains is a group of buildings that is similar, but not equal in size, to a typical Italian village.

This cluster features a small square, where you can stroll around, a tourist information office, a lovely church and a drinking fountain. There is also a museum just across the temple complex that is worth exploring. If you are planning to stay in Paestum until sunset, you may want to consider having dinner at one of the restaurants on the nearby Via Tavernelle.

Paestum is open from 8:45 in the morning until sunset, which varies from 3:00 pm to 6:30 pm, depending on the time of the year. The last entry is usually allowed an hour before the closing time. It is possible to see the Heritage Site on a day trip from the Amalfi Coast, Salerno and Naples, but it is also rewarding to stay around overnight because of its serene and magical atmosphere. The temples are also beautifully illuminated in the evenings.