Located 2,000 miles from the nearest population center, Easter Island‘s geographical seclusion has not hindered it from weaving a colorful tapestry of wonder, history, and yes, even controversy. Its inhabitants have endured famines and epidemics that almost wiped out its entire population. They aren’t strangers to colonialism, slave raids, and civil wars that would soon define the future of its people. And in this remarkable society that has developed in the bosom of isolation, enigmatic giant stone monoliths sprouted all over to seemingly elicit both awe and confusion for generations after.

The Rapa Nuis (locals) themselves run the entire tourism program of Easter Island. Far Horizons Archaeological and Cultural Tours organizes packages, including hotels and tours. Take the Lan Chile flight from Santiago, Chile to Easter Island. Roundtrip airfare costs around 800 USD. The most celebrated cultural event in the island is the Tapati Festival held from late January to early February and it is worth planning your visit for that time.

It’s easy to drive a car around to see most places in the island. If you only have a day or two, renting a car with a knowledgeable local driver is always best. While taking a bicycle ride is fun, most roads to the main sites can be treacherous given the uneven roads. 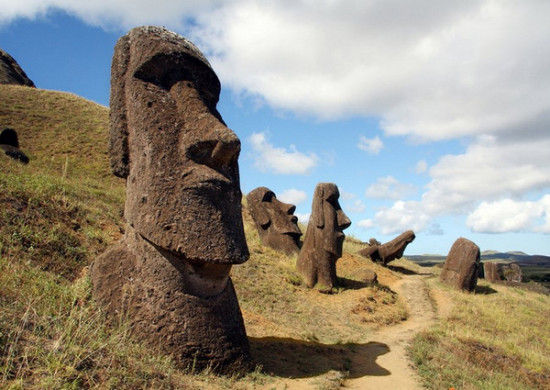 The Moai, grand monolithic human figures, dot the coastline of Easter Island as if protecting its inhabitants in perpetuity. The Moai are immortalized faces of deified ancestors that gaze inland with their overly large heads sprouting from their pliant bodies. The Rapa Nui people carved these human figures between the years 1250 and 1500. There are 887 extant statues, and they part of UNESCO’s prestigious list of World Heritage Sites.

At over 45 feet tall, it must have been extremely challenging to carve and move the Moais at Rano Raraku. Centuries of erosion have covered parts of the Moais, but there’s an undeniable terror that penetrates the senses as one listens to the howling winds that seem to block the giant’s basalt mouth from screaming its story.

The largest Moais can be found at Ahu Tongariki at the south coast section of the island. All 15 moais, toppled due to either war or natural events, now stand proudly after a massive restoration project in 1992. On the other hand, the statues at Ahu Naunau are remarkable for their red scoria headdress. The reason behind this remains a mystery.

There’s an unexplainable thrill that comes with exploring the fascinating extensive cave systems in the island, most of which can be found near Ana Kakenga. A kilometer south of the island, you can find the beautiful islets of Motu Nui and Motu Iti which host scuba diving and snorkeling activities. Take a dip at Ovahe, a beach surrounded by spectacular cliffs in the southern shore of the island near Ahu Vaihu. A lot of tourists make sure to include Anakena, on the north side of the island, on their itinerary. The place is packed with surfers from all over who can’t wait to get that impressive shorebreak with a bit of north swell.