Kusadasi is not just a coastal town in the Aegean Sea; it is also a very popular tourist resort in Turkey. Located specifically in the Ayudin Province, the island receives thousands of visitors especially those coming from Northern and Western Europe.

The name Kusadasi means Bird Island in Turkish. Connected to this island via a short causeway is the small Guvercin Adasi or Pigeon Island. Guvercin Adasi may be tiny but it features a romantic and charming atmosphere. It is home to a medieval castle, complete with a restaurants and disco bar. There is also a lovely flower garden surrounding the fortress and nice beaches on its coast.

Because Kusadasi is a famous vacation spot, the island is heavily populated with various types of hotels, resorts, restaurants and other tourist facilities. Some of the biggest hotels and sophisticated mansions here, stand behind the hills. The peak season for visiting Kusadasi is between May and October. The island is also a favorite port of call for many cruise ship companies. That is why the days here are busier than the nights. The good news is that most small shops are open to haggling with cruise passengers and you may come home with quite a bargain. 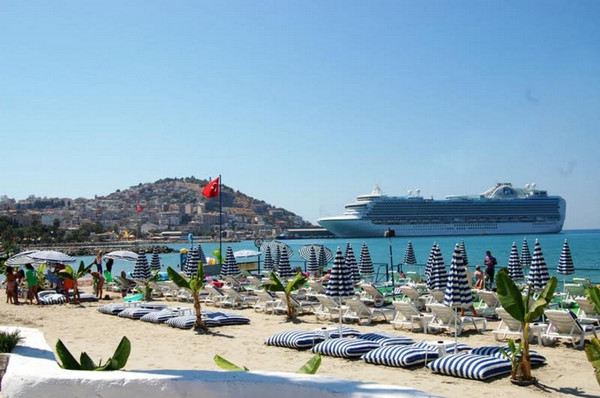 This Turkish island is known for its gorgeous and clear turquoise waters. It is gifted with many wide sandy stretches. You have so many choices when it comes to which beach you want to spend most of your day at. The beaches closest to the town center are usually the most crowded, especially during summer. If you would like a more serene atmosphere, make your way to Dilek Peninsula National Park, also known as Milli Park. In addition, you find some marvelous beaches both on the southern and northern sections of the island.

One of the attractions in Kusadasi is its marina, which is considered one of the largest in the country. Aside from its surrounding clear waters, the marina is also the perfect place to watch beautiful sunsets. Not far from the marina is the impressive ancient city of Ephesus, which in itself is a worthwhile destination. Kusadasi also boasts a great nightlife atmosphere fueled by the strong presence of bars, cafes, pubs and clubs. It is also an ideal place to taste the famous Turkish cuisine, especially when a number of the dining places on the island offer inexpensive menus. 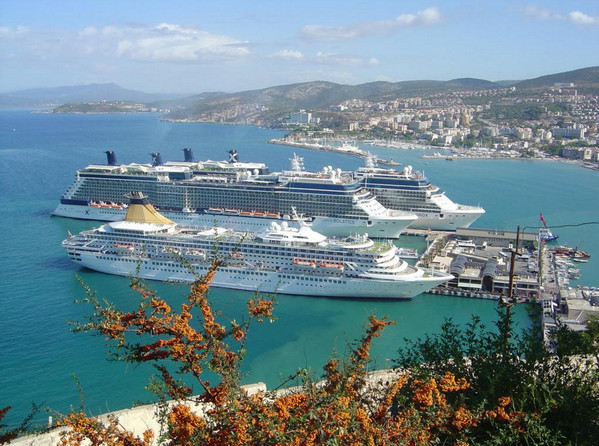 Kusadasi is the ultimate shopping haven. Here, you will find the Scala Nuova shopping center, a shopping and dining complex right next to the large harbor where cruise ships docked. But if you want a more cultural feel while shopping, head over to the open air markets in the large streets of Kusadasi. These markets welcome patrons every Tuesday, Wednesday and Friday; and are the main venues for villagers to sell their freshest produce. These open-concept markets are also excellent places to watch locals in action or perhaps interact with some. Tuesday and Friday markets are more concentrated on selling food, while Wednesday market highlights textile products.

The closest major airport to Kusadasi is Adnan Menderes Airport in Izmir. From this airport, you can take a bus, which will drop you off at the island. Aside from being the port of call for cruise ships, the city is also served by daily ferry services that connect it to the neighboring Greek island of Samos.