Think of a beach in British Columbia, and you probably imagine the steady cadence of Pacific rollers crashing against a rocky shoreline. What about warm water and white sand? Or urban gems that boast striking views of the city? In BC, there’s a beach that’s perfect for everyone from lazy sun lovers to active thrill seekers.

Few know the pull of the ocean like local Charles McDiarmid. “My childhood was a bit like Huckleberry Finn’s,” says McDiarmid, who’s spent most of his 50-plus years on one of British Columbia’s iconic beaches. Long before there was a road across Vancouver Island to the west coast he was building sand castles and beachcombing the endless strands outside Tofino, where his father was the only doctor. The McDiarmids went on to build the Wickaninnish Inn in 1996 on land that the family patriarch purchased on Chesterman Beach. “We especially loved winter storms, when the entertainment was compliments of Mother Nature.” 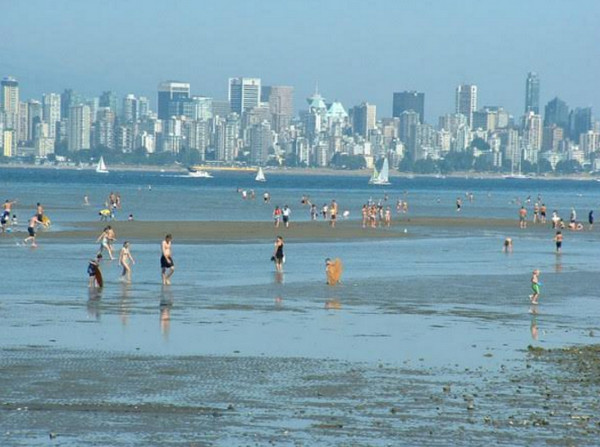 At “the Wick,” the McDiarmids created a Storm Watchers experience for getting up close and personal with winter’s gale-force winds and thundering waves, as well as a drying space at the après-storm Driftwood Café, and a fireplace in — and sea view from — every room.

Those wild Pacific Ocean waves also prompted a surfing craze at Mystic Beach in Juan de Fuca Provincial Park, near Victoria on the Island’s southern tip. A 2.5-kilometre (1.5-mile) hike through mossy rainforest and across a suspension bridge ends at a dramatic, bluff-lined beach with caves, a rock arch and a magical waterfall plummeting right to the sand, perfect for a post-surfing shower.

Other BC beaches are almost tropical, with glittering turquoise waters and white sand. Tribune Bay on Hornby Island in the Gulf Islands, accessible by ferry from Vancouver Island’s east coast, is nicknamed “Little Hawaii.” In summer, it’s sun-warmed to balmy temperatures, and only a five-minute walk to the island’s funky village.

Another beach has — believe it or not — the warmest water north of Mexico. Savary Island, off the Sunshine Coast northwest of Vancouver, requires a short water taxi trip from the town of Lund. Foot passengers only, but take a bike or a kayak to explore the kilometre-wide (.6 mile-wide) and 7.5 kilometre-long (4.6 mile-long) island with its forest roads, sand dunes, and meadows. Often you’ll have one of dozens of crystal-clear aquamarine beaches to yourself. 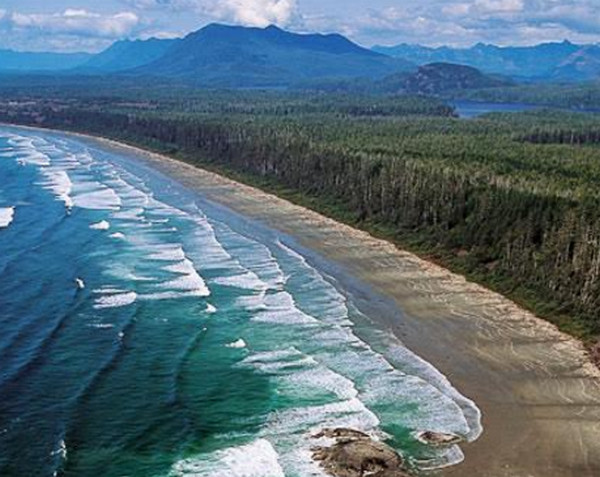 Beaches are so ubiquitous in BC you even find them in Vancouver proper. English Bay in the West End, Jericho Beach near UBC and Ambleside in West Vancouver are among the most alluring.

There are also hidden gems in Greater Vancouver. Crescent Beach, an hour south of the city near the Washington State border, is a cottage-country neighbourhood and quaint village where restaurants and cafes are just steps from the surf. Amid the waft of salt water and fish-and-chips, you’ll find paddle boards and kayaks for rent. In August, theatrical productions are brought to life in the open-air Beach House Theatre overlooking the water.

Charles McDiarmid is an avid surfer; hence his love of Pacific breakers. For those who prefer water-skiing and warmer water, the Thompson Okanagan region’s many lakes are summer-vacation heaven. Seymour Arm, part of Shuswap Lake with its 1,000-kilometre (621-mile) shoreline, features waterfalls that cascade through a spectacular series of pools behind Albas Beach in Shuswap Lake Marine Provincial Park. It’s a remote place, not easily accessible — after a two-hour boat trip from Sicamous (or a three-hour forestry-road drive from Salmon Arm), a three-kilometre (1.8-mile) loop trail leads to sandy Albas Beach, where a waterfall-cooled plunge awaits you.

For a more laid-back, warm-water playground, it doesn’t get better than Osoyoos Lake, Canada’s warmest fresh-water lake. Bathed in sunshine among the cactus, sagebrush and vineyards, the lake is located near the town of Osoyoos in Canada’s only true desert. At the Watermark Beach Resort, the whole family can have fun with everything from wakeboards and jet skis to sailboats and kayaks. 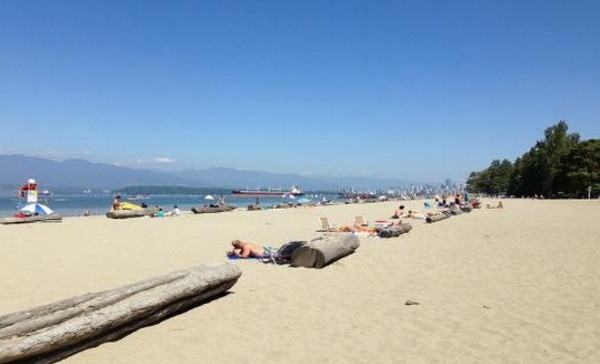 In southcentral BC, the Kootenay Rockies offer lakes with beaches that boast mountain views. Pitch a tent alongside the sand at Kokanee Creek Provincial Park and finish up the day with a soak at Ainsworth Hot Springs, a 20-minute drive away. To the southwest, Christina Lake Provincial Park’s beach is summer-central for water sports, fishing and golf amid classic cottage country. It’s right on the nation-wide Trans Canada Trail, and boasts some of the province’s warmest waters.

For people like Charles McDiarmid, though, the ultimate BC beach is a sandy shoreline with a rainforest backdrop of giant Sitka spruce and cedars. There are kilometres of such untouched beaches in the remote Gwaii Haanas National Park Reserve on Northern BC’s Haida Gwaii islands. North Beach, at the northern tip of the archipelago, draws surfers and kite-surfers from around the world each November for the annual Expression Session surf competition.

If you prefer a mellower experience, you can beachcomb for rare Japanese glass floats, watch soaring bald eagles or walk or drive for miles along the beach. “There’s nothing like experiencing raw nature on a wild stretch of beach,” says McDiarmid. Maybe, but if you have a different picture of the perfect beach, you’ll find it in this extraordinarily diverse province.