The Munich Oktoberfest (Beerfest) is not only one of the biggest fairs the world has ever seen, it is also the most famous drinking event on earth. This festival, which embodies the spirit of Bavarian culture, attracts millions of people from all over. Indeed, it is a must do for a number of adults who love to unwind and have fun.

The famous Oktoberfest began in October of 1810, when the crown prince of Bavaria, Prince Ludwig married Princess Therese von Sachsen-Hildburghausen, and held a grand outdoor celebration. Today, this humongous event starts as early as September, and stretches to 16 to 18 days. It is usually ends on the first Sunday of every October.

The beer festival is typically held on a field known as die Theresienwiese, named after Princess Therese. Aside from the mighty presence of German beer drinking, there are other activities at the festival that will make everyone happy. You can go for fun rides, watch colorful parades, eat from several food stalls and visit various carnival booths. But the obvious highlight is the 14 beer halls (tents), which are put up by the most notable Bavarian brewery companies like Spaten, Paulaner and more. Each day, the festival fun begins at 11 a.m. and ends at about midnight. 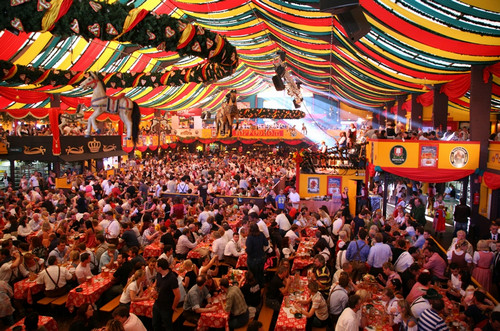 The beer tents usually serves 6 kinds of beer, and are equipped with long picnic tables to accommodate the crowd. Expect lively music, lots of dancing and rubbing shoulders with the jolliest revelers. If you are in a group with more than 5 members, it is best to reserve a table. The tents are made and decorated to be distinct from others. One of the largest tents is the Hofbru-Festzelt, which is able to facilitate almost 10,000 people. Other prominent tents include the Schottenhamel, the Hippodrom and the Hacker-Festzelt, which offers traditional live music.

Just when you think that only beer-loving adults participate in the Oktoberfest, you will be surprised to know that this event has been trying to draw families as well. In fact, on the two Tuesday afternoons of the festival, the local government gives out special discounted transportation and entry prices for families.

There are many ways to enjoy the Oktoberfest in Munich. You can plan a trip on your own or join an organized tour for the event. Going on a tour gives you more convenience and some advantages, like having your accommodation and transport pre-arranged. Aside from international flights regularly coming in and out of Munich, there is also a train service that connects the city with other major places in Europe.

From hostels, pension houses to hotels, there is wide range of accommodation options in Munich. However, the city can be an incredibly busy spot during the festival, so make sure to make the necessary reservations way ahead. If you book an accommodation within the city center, you will have the advantage of being within walking distance to most major Oktoberfest venues. One very popular lodging option choice for those on a budget is camping at Thalkirchen. Booking a dorm or a pre-erected tent here includes breakfast as well as a shuttle ride to and from the Oktoberfest grounds.