Natal City of Brazil is fondly called the City of the Sun, and for good reasons. The city boasts a vibrant atmosphere, warm people and a picturesque coast. It is no wonder that this capital city of Rio Grande do Norte state is a premier tourist destination, especially for European travelers. Historically, the city was named after Christmas, because it was founded on December 25, 1599. It is regarded to be one of the safest cities in Brazil because it enjoys a higher quality of living, compared to other areas in the country. 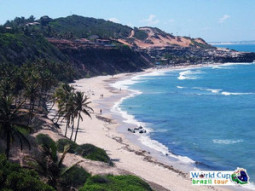 The city is divided into districts, and the two most popular ones are the southern and eastern ones. The North district is highly populated by working locals, while the West is the least industrialized area in the city. The South district is the haven for tourists. This is considered to be the richest and most developed section in Natal, as it houses high-end hotels, huge shopping malls and fancy restaurants. When you travel east of the city, you will find its Historical Center, which features the most significant historical landmarks. Since Natal is just off the coast of the Atlantic Ocean, almost all districts have nearby beaches.

Some of the sites you should visit in the historical section of Natal are the Ponte de Todos, and Forte dos Reis Magos. Forte dos Reis Magos or Fortress of the Magi is a star-shaped 16th century fortress and is one of the oldest colonial structures in Natal. Ponte de Todos is an impressive bridge over the Potengi River. Other historical sites that you can visit are the Memorial Camara Cascudo, a 19th century memorial in honor of the celebrated anthropologist, Luis da C‚mara Cascudo; Igreja de Santo Antonio, a baroque-designed church; Teatro Alberto Maranhão Natalís, the oldest theatre; and the historical street called Rua Chile. 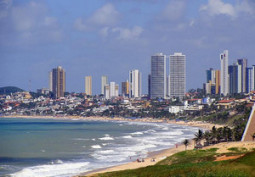 Natal’s coast is naturally blessed with lovely beaches, and the most visited one in the area is the Ponta Negra Beach. Located south of Natal, this sandy 4km beach is popular among tourists not only because of its natural beauty but because of its modern infrastructure and amenities. The beach front is filled with restaurants, bars and cafes, which create a great nightlife.

If you walk from the beach towards its southern end, you can find the city’s tallest sand dune and one of the most recognizable landmarks in the city; the Morro de Careca. Other similar beaches worth a visiting are the Via Costeira and Praia dos Artistas. If you desire a less touristy spot with more locals to interact with, then head out to beaches like the Praia do Forte, Redinha or Praia do Meio.

Aside from nearby beaches, Natal can serve is an excellent base for travelers who want to explore the other natural attractions within the state of Rio Grande do Norte. Some of these attractions include Pipa Beach, BaÌa Formosa Beach, Barra do Cunha Beach, and Carcar Lake. The city offers a wide range of accommodation and restaurants.