Baku – chaotic, charismatic and utterly cosmopolitan. It is the largest city not only in Azerbaijan but also in the entire Caspian Sea/Caucasus area. It is a city that lives on reinventing itself, seamlessly blending Eastern influences with Western.

Few cities in the world can mimic Baku’s chimera-like power to change, adapt and localize. This Azeri capital is a city where you can find used Russian Ladas sharing the road with gleaming Mercedes sedans. Ancient stone mansions coexist with modern towers made of glass and steel and old, poorly restored but cheap Soviet housing blocks. Here the old becomes new and old again in the unstoppable passing of time. Here lies Baku’s charm. 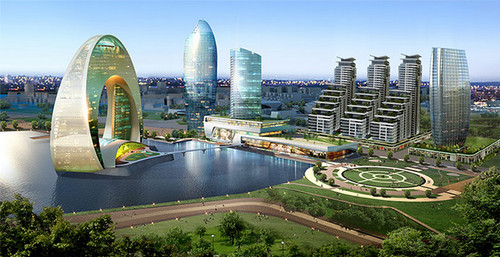 This city is nice to tourists. Visitors who come to the city can right away find relaxation in the tree-lined streets and elegant teahouses found everywhere. If they are feeling a bit homesick, there are expat pubs that comfort and cure the need for a few pints of dark ales or a big juicy burger just off the grill.

UNESCO World Heritage has tried to slow down the evolution of some parts of Baku, but the city simply refuses to conform. Baku is not what it is because of its past, even if it does have a very interesting one, but because of what it can be in the future. Its dynamic, potent and intoxicating nature is what makes it unique – slowing its transformation down only kills this city’s essence.

But some things in Baku are worth keeping. Old City, with its fascinating, almost time machine-like qualities is an example. This area has stood witness to the changes in Baku since the medieval era and its crenellated arc, strong fortress wall and simple design is an exotic reminder of the glorious past the city has had. The Maiden Tower is a popular first stop for tourists who want to get the full Baku experience. It is also a whimsical reminder that the city has gone so far and is moving only to greater things. 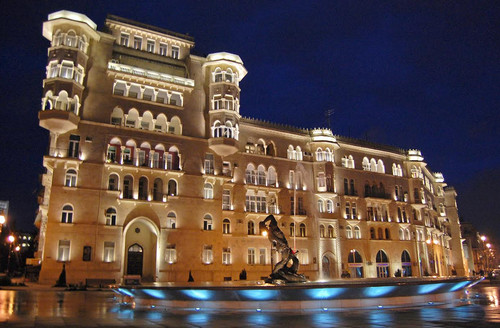 This is a city whose palate has been refined by a multitude of culinary influences. Its proximity to the Balkans means that stuffed vegetables like dolma is common. Lamb, mutton and garlicky yogurt sauce are present on any restaurant menu offering Azerbaijani cuisine. Plov, a dish that combines any meat with aromatic vegetables and herbs and served with rice, is also very common but the recipe varies from one restaurant to another.

Heavy Greek and Turkish influences can be noticed as well but with a slightly spicier and more nuanced twist. The Azerbaijani love for chopped salads made of tomatoes, cucumber and onions with cheese and olive oil might as well be from these two culinary giants. The use of yogurt in anything from sweet to savory is also distinct to Greek and Persian cuisine. Of course, desserts like pakhlava and halva as well as the use of rose water in refreshing sherbets are, without argument, borrowed from them as well.

A visit to Baku is a wonderful treat and an informative and fun exploration of the changes taking place in Azerbaijan.