Via dell’Amore is not only one of the most popular trails in Cinque Terre, Italy – it is also one of the most romantic. Thus, it’s not surprising that the trail has earned the name “the Lover’s Walk”.

Via Dell’ Amore connects the towns of Riomaggiore and Manarola. It can easily captivate any hiker with its incredible natural scenery, which includes beaches, cliffs and the turquoise sea. It’s not only the landscape that makes this pathway world-renowned but even its history seemed to have been ripped off from a romantic novel.

Situated in the picturesque Cinque Terre region of Italy, Via dell’Amore was, in fact, conceived during the start of the 20th century, when the railway line of Genoa-La Spezia was established. The building of the railway line is part of a modernization initiative, and soon it was necessary to make two paths, one from each town. Before this big project, people from both towns did not interact with each other, let alone develop romantic relationships. But what started out to be a practical reason for building the pathway resulted in romantic unions. The trail made it possible for people of both towns to get to know each other and very soon, a number of them married individuals from each other’s town.

These days, Via dell’Amore became a must-go spot for tourists in Cinque Terre, especially visiting couples and honeymooners. The pathway stretches to about 850 meters and most of it is flat and paved. Thus, Via dell’Amore is considered the easiest and most laidback part of the Sentiero Azzurro, also known as the Blue Trail. This trail runs around the coast covering an area of about 7.4 miles or 12 kilometers. It only takes only approximately 25 minutes to complete the walk. But you don’t have to rush while hiking the Lover’s Walk. On the contrary, a stroll along it is all about taking your time and enjoying the breathtaking scenery. 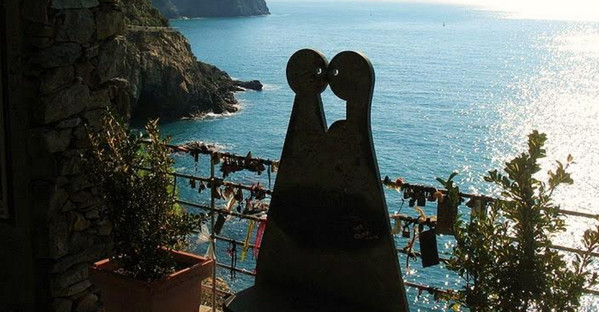 Spending a few minutes snapping photos is also very much worthwhile. One of the most fascinating things you will encounter while hiking Via dell’Amore are the lovers’ padlocks that were locked around the wire mesh, located under the tunnel close to Manarola. The padlocks were put there by young lovers with the hope that their love will last a lifetime.

The Lover’s Walk receives a large number of visitors every year. This is why you should expect heavy pedestrian traffic when you’re walking the trail. You can start the hike either from the entrance Manarola or Riomaggiore. The trail is managed by the Parco Nazionale delle Cinque Terre. Unfortunately, like other paths in Cinque Terre National Park, Via dell’Amore can become a victim of bad weather conditions including erosion. So there are times that the trail is closed. So make sure to check with the Cinque Terre National Park website to determine if the trail is open before heading out to Via dell’Amore.

It is recommended that all hikers wear the appropriate footwear to experience a safe and comfortable hiking trip. You need to pay an entrance fee to access the trail. The admission ticket is going to be inspected on both sides of the trail. If you want some refreshments during the hike, you can stop over at Bar dell’Amore, a small yet lovely café situated along the trail.