A monument built out of love – this is the legacy that Mughal Emperor Shah Jahan wanted to remind the world when he built this structure to house the tomb of his young wife, Mumtaz Mahal.

This is one of the main reasons the Taj Mahal has gained worldwide popularity. This most recognizable of Indian landmarks does not stand for leadership, power or wealth – instead, it symbolizes eternal love. As mentioned, Taj Mahal was originally built as a mausoleum. Today, it is not only a UNESCO World Heritage Site but also one of the 8 man-made wonders of the world. 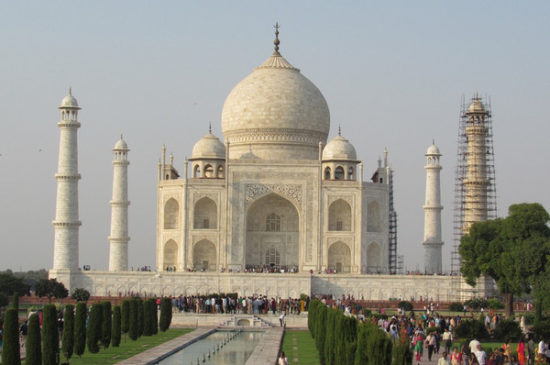 Often simply called the Taj, this architectural masterpiece is found in Agra, India. Fortunately, Agra is well connected to the major cities in the country including the capital New Delhi. You can choose to fly to Agra from Delhi or take the bus or train services. Attracting more than 7 million visitors per year, the complex also includes a mosque, on the left; a guest house on the right; a couple of small palace-like buildings and a garden that adds up to the magnificent appeal of the site. The pathway leading up to the mausoleum is beautifully decorated with fountains and a pool. 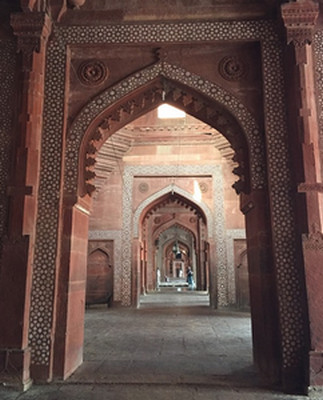 The Taj is also admired for its impeccable geometrical patterns, and proportions that reflect the Mughal art and design principles. The mausoleum building itself, also called Rauza-i-Munauwara is mostly made of soft yet pure marble and decorated with semi-precious stones. Inside the mausoleum lies a domed hall which leads to the tomb of Mumtaz. Shah Jahan’s remains were also placed here after his death. This hall exudes a perfect octagon shape. From the southern entrance of the hall, you will find a stairway that goes down to the rectangular-shaped lower tomb chamber where the actual graves of the King and the Queen are kept. The lower chamber is not accessible to the public. Nevertheless. You will still thoroughly appreciate the serenity and quiet beauty that envelops Taj Mahal. 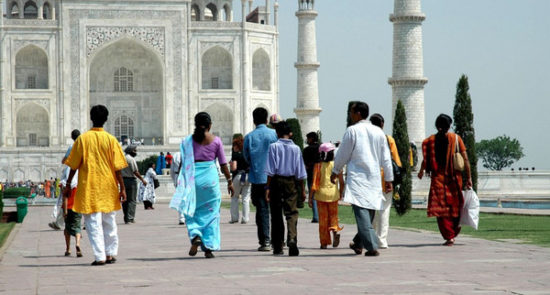 Its design also allows it to exude different shades depending on the time of the day. When you visit the complex in the morning, you will find the building radiating in a pinkish hue as it interacts with sunlight. But at night arrives, it glows bright and white for everyone to admire. During dawn and sunset, the Taj beauty is only magnified. A lot of work was put in into building this marvelous complex, and learning more about its history will allow you to truly appreciate this precious landmark.

One of the most ideal things to do while you are exploring this mausoleum complex is to hire an experienced guide who will reveal the facts and stories behind the magnificence of the Taj. The U.P State Tourism Development Corporation conducts daily half-day and full-day tours of the complex. The tour packages usually include coach transport, entrance fee and guide services fee.

The peak season for visiting the Taj Mahal includes the months of October, November and February, mostly because they usually experience cooler weather. To get to the actual complex, you will need to walk from the parking lot or catch an electric bus. Take note that the monument is closed on Fridays and children below the age of 15 can enjoy free entry.