If you think the Thailand Vegetarian Fest is a boring feast of vegetables, think again. More than the abstinence of meat, this is a celebration of faith, devotion, and sacrifice through ceremonies of self-mutilation that are certainly not for the faint-hearted. If a bold and bloody adventure excites you, then this celebration is a perfectly bizarre event you should not miss. 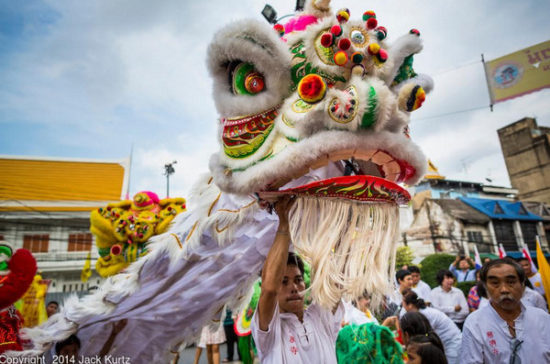 The vegetarian fest is an annual nine-day celebration of Chinese Taoist piety to the Nine Emperor Gods on the ninth month of the Chinese calendar. Check the schedule first before planning the trip because the dates sometimes fall in September or October. This is held in large Chinese communities in Thailand but the tourist island of Phuket, where it is believed to have started in 1825, currently has the grandest and most colorful celebration. It is a time of mind and body purification for the devotees when a stringent vegetarian diet is followed, and vices are forbidden. Make sure you bring mostly white clothes as wearing white is a custom of cleansing. Everything in the vegetarian fest revolves around spiritual ablution and inner peace. 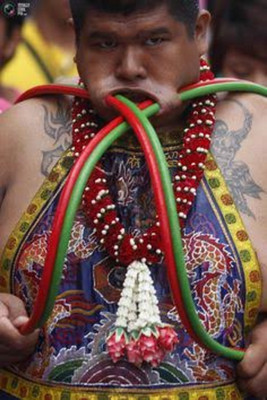 On the first day, witness the raising of the ten-metre pole called Go Teng with nine lanterns in Jui Tui Shrine, the biggest Chinese temple in Phuket, although the same ceremony is also done in other shrines. This tradition is done to invite the gods to descend and revitalize the spiritual power in the temples. The procession of the gods’ images accompanied by loud drum beating and fireworks around the city and the temples is believed to ward off evil spirits. After this, people start bringing to the temples their household gods and offerings of food for the deities. You may join the rituals of lighting joss sticks to the various gods and lighting candles on the pole lanterns.

What makes this vegetarian festival unique is not the stretch of vegetable dishes, but the perilous feats of the mah songs, entranced devotees who do not scar, bleed much, and feel pain because they are believed to be possessed by the gods. During their parades throughout the week, you will find devotees bathing in hot oil, walking on blasting firecrackers and burning embers, and climbing ladders with bladed steps. Their cheeks, tongues, limbs, and torso are impaled with swords, spears, skewers, and other objects they can pierce themselves with. These worship acts of self-mutilation are believed by the devotees to transfer the evil to themselves and bring good luck to the community. 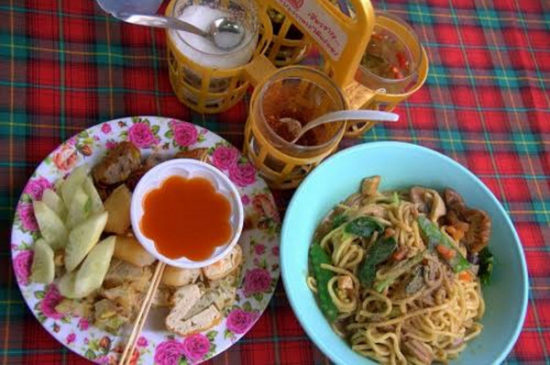 Of course, the vegetarian fest is not complete without veggies dishes. Take the epicurean side of you for a food trip of authentic Thai cuisine that is purely vegetarian with meat-like ingredients of soya and protein. After a hearty meal, go around with your camera for colourful cultural shots at the temples and during processions. Visit the shops for memorable souvenirs of the festival.

After the week of frenzied parades, you will find the farewell rituals on the last day lighter yet at the same time intense when the paper palace of the Jade Emperor is burned on the shrine grounds, while the pole of nine lanterns are brought to the nearest river or sea to send off the nine emperor gods. The festival ends with a grand fireworks display at the main centre.