The Aran Islands Galway represents everything that is gorgeous about old Ireland. These pristine islands attract thousands of tourists every year. There are three islands that make up this peninsula: Inis Mor (Big Island), Inis Meain (Middle Island) and Inis Oirr (East Island). 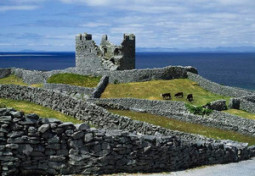 Situated at the mouth of Galway Bay, these islands represent the transition of the country from the Iron Age and medieval to modern times. Because the Aran Islands boast historical monuments, geological formations and overall dramatic landscape, it is not surprising that it became the literary inspiration for many great authors like John Millington Synge and James Joyce. It has also earned the description “Islands of Saints and Scholars.”

Visiting the Aran Islands means being exposed to the true Irish tradition. Here, locals speak both Irish (Gaelic) and English. Some of the prominent and spectacular landmarks that defined Aran include Dun Aonghasa and Cliffs of Aran. Dun Aonghasa is a fort that is nestled on a cliff of Inishmore. This fort’s 4m thick wall encloses a vicinity that is 50 meters in diameter. While here, you can do wall walks and check out the chambers. The Cliffs of Aran are so magnificent to the eyes that it became the venue of Redbull Cliff Diving.

Inis Mor, the biggest and most visited of the Aran Islands, is known for its serene indented coastline and great hiking opportunities. The island has a length of 8.7 miles (14 kms) and a width of 2.4 miles (3.8 kms). Walking around the island brings plenty of pleasant natural surprises as there are plenty of wildlife and wild flowers in the area. If you are more of a cyclist than a hiker, it also possible to enjoy Inis Mor through a biking visit. It is popular among visitors to rent a bike in the Kilronan village. Guided tours on minibuses is also an option 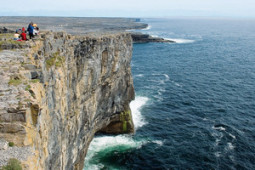 If you really want to immerse into the authentic Irish culture and enjoy the famous Aran landscape without the tourist crowd, heading to Inis Meain is an excellent idea because it is least visited Aran Island. Inis Oirr, on the other hand offers visitors an opportunity to marvel at the O’Brien’s Castle. This exquisite castle was built during the 14th century and is now the property of the O’Flaherty clan.

Aran is also known for its Aran sweaters, which had surfaced in the early 20th century. These sweaters are known for their intricate knitted patterns which also reflect the traditional knitting style of the Aran women. An Aran sweater is perhaps the best souvenir item you can purchase to remind you of your incredible experiences on Aran Islands.

You can reach Aran by taking a ferry boat from Galway City Dockside, Rose a Mhil in Connemara and Doolin in Co. Clare. If you want to spend some time on all three islands, take the inter-island ferry service Aran Direct, which runs during peak season. During low season, you need to return to Ros an Mhil, and take a boat from there to bring you to the island of your choice.