When you hear the name Huatulco, think of a place that stretches over 20 miles, populated with nine bays and 36 beaches. This beach haven lies on the coast of Oaxaca state, Mexico. Formally called Las Bahias de Huatulco (the Huatulco Bays), the area was developed in the 1980s to becomes the tourist resort powerhouse it is today. Although some bay areas have been developed as a tourist complex; a large of portion of the bays are protected and declared as part of the Huatulco National Park. Later, the park was listed as a Biosphere Reserve by UNESCO.

La Crucecita and to Santa Maria Huatulco are the two towns in Huatulco inhabited by locals. La Crucecita, in particular, was intentionally established to become a home to tourism workers. But, there is also a number of shops and restaurants in this town that draw in the tourist crowd. In addition, it exudes that small Mexican town feel that travelers love. One of the points of attraction of La Crucecita is the church of La Parroquia de Nuestra Senora de Guadalupe and its 65 foot Virgin of Guadalupe statue.

Most visitors to Huatulco come to enjoy the resort’s wide selection of beaches. You have the choice of spending the day on a golden or white sand beach. But some secluded unadulterated beaches can only be accessed by boat. You can also go on a motorboat tour around the bays of Huatulco. Excursions like this can be easily arranged through a local operator.

Some of the popular beaches include Santa Cruz and El Arrocito because they are perfect for swimming. If you want to see where the large resorts and hotels are situated, head out to the Tangolunda, the largest bay in Huatulco. The other nine bays in the area are Conejos, Chahue, Cacaluta, Maguey, San Agustin Santa Cruz, Organo, and Chachacual. Out of all the nine bay areas, Tangolunda and Santa Cruz have the best water sports facilities for a range of water sports like sailing, wind surfing and jet skiing. 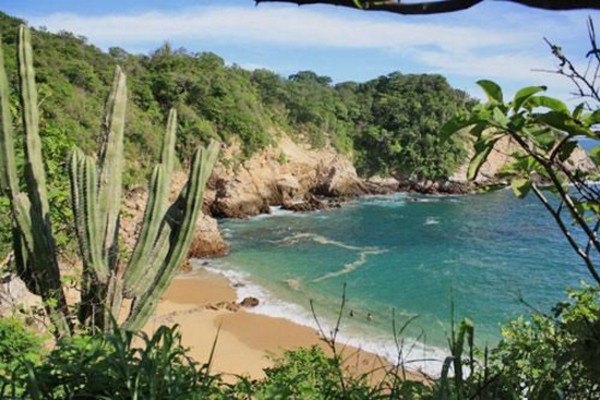 Chahue bay is another certified tourist site, equipped with a yacht marina, a shopping center and a wide selection of restaurants and cafes. Its main landmark is the Guelaguetza Park, which is a regular host for cultural shows and festivals. However, if you seek some peace and quiet, and a place that makes you forget everything and just relax, Conejos Bay is the perfect candidate. Of course, it also has its fair share of beaches, and most of them have calm waters excellent for swimming.

But beaches are not the only things to enjoy while visiting Huatulco. It has the lush jungle landscape, diverse biodiversity and the Sierra Madre mountain ranges as its background, to make it very attractive to nature lovers. San Agustin bay is home to the some of the largest coral reefs in the Pacific while Cacalutaís Zanate lagoon is a bird migration spot.

When planning you visit to Huatulco, make sure to allow enough time to not only visit the wonderful bays and beaches but also to explore the towns, the markets, and of course the opportunity to experience the towns and the culture.