The 60 acre Jardin de Luxembourg is a park with a history as stunning as the beds of multi-colored beds of flowers and structures enclosed in it. It is a marriage of France and Italy in structure form. Completed in 1625, the Luxemburg Gardens are the environs of the Luxembourg Palace or Palais de Luxembourg which was ordered to be built by Henry the IV’s wife, Marie de Medici. She escaped Louvre after her husband’s death and sought more than a respite, she wanted an abode that would be a reminder of her home when she was young – the Palazzo Pitti.

Today, the Luxembourg gardens is considered one of the world’s most beautiful, most popular, most accessible and most diverse public park with its complex spaces for all people regardless of demography. While only the second largest park in Paris, the gardens sit one hundred six statues including Marie de Medici herself and other queens of France, and those of celebrated individuals in history and the arts such as Beethoven and Chopin. There are also statues of animals, statues on or after Greek Mythology. A bronze replica of the statue of Liberty, or its mini version, can also be found here.

The focal point of the park is the octagonal pond called the Grand Bassin which is quite popular among children for the small boat rentals to be had from carts around the pond. The small boats with colorful sails set by the children are a sight to behold even to strolling adults. Aside from the pond, the Luxembourg gardens has more amenities for children including a puppet theatre, a carousel, and the favorite pony rides.

For the romantics and superstitious, the park abounds with magnificent fountains including its most famous Fountaine Medici which is a 17th century fountain in the romantic baroque style. The fountain consists of allegorical figures of the two rivers Rhone and Seine and its crucial feature is Polyphemus watching the lovers Acis and Galathea. 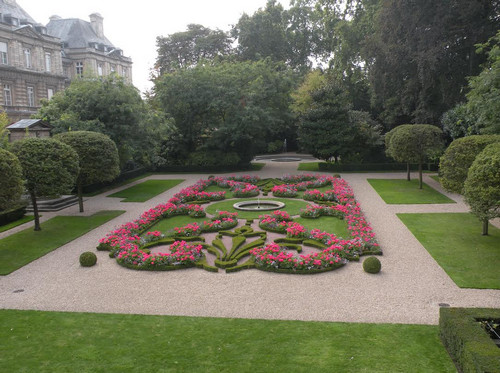 Aside from the Fountaine Medici, other popular fountains are the 1806 Fountaine de Leda depicting Leda and Zeus masquerading as swans; the 1873 Fontaine de l’Observatoire whose central feature is a globe held by four women representing four continents; and Fontaine Delacroix which is a fountain that pays tribute to the French painter Eugene Delacroix. His bust rests on the pedestal and around it reaching the bust are a sensual depiction of Time, Glory and Genius.

As the park is a complex of gardens, there is vast space for strolling along English themed gardens. Numerous beds of vibrant flowers, considered the most beautiful in all of Paris, are arranged in geometric designs and secured by rails. The lawns of well-manicured grass are relaxing and inviting for sitting. For the more apposite ones, benches are not scarce.

At the entrance, concerts and other activities are held. Musical programs run in July, August and September. In this same space, chess and bridge enthusiasts come together on a regular basis without a care for what season it is. Other sports that are also held here are tennis, basketball and martial arts.

Four hundred years after the Luxembourg garden was built, it has become this dynamic and successful open space. Perhaps an image never imagined by Marie de Medici when she commissioned them to be made.