Picture an underground chamber made of rock salt but is mainly used as a place of Catholic worship? It is mind blowing isn’t it. Fortunately, such a place is not a figment of human imagination. The stunning underground Salt Cathedral does exist, and it is located at the Zipaquir – town in Columbian State of Cundinamarca, just about 48 kilometers from Bogota. It is often regarded as the “First Wonder” of the country. The cathedral has had about 13 million visitors from all over the glove.

Once a salt mine dug within a hill called Zipa, the Salt Cathedral now stands today as a magnificent religious sanctuary, which is considered one of the most prominent in all of Columbia. The cathedral occupies a huge area, about 75 meters long (246 feet) long and 18 meters high (59 feet). Because of its size, it can easily facilitate more than 8000 people. During the day, parts of Zipaquir’s Salt Cathedral receives natural light from the sun. But in some parts phosphorescent lights are used to illuminate its magnificent walls. It is indeed an architectural and artistic masterpiece, which exemplifies the Colombian artisan’s masterful engineering and design prowess.

Upon entering the cathedral, you will be greeted by the Virgen de Guas• (Virgin Mary) sculpture, which is the patron saint for the miners. Then, you will find your way to the Ceremonial Plaza, where the iconic mining monument, Cardinal Cross is situated. The plaza also houses fountains and a bell tower. Inside the cathedral lies a bountiful art collection, which includes exquisite salt and marble sculptures. Its corridors are also adorned with various religious images, made primarily of saline rock. The tunnels leading up to the main cathedral sections hold the Stations of the Cross. 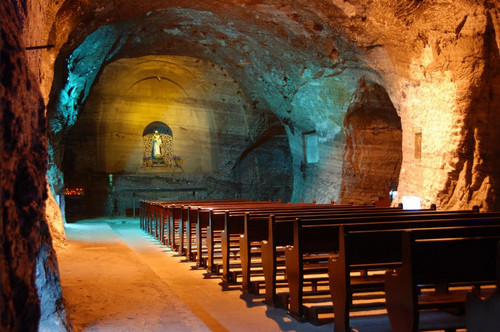 Some of the sculptures that will captivate you include the indigenous-looking La Piedad and the 1950 Guardian Angel carved by Italian sculptor Ludovico Consorte. The main Cathedral section features three naves, which represent the birth and baptism; the life and death; and the resurrection of Jesus Christ. Each nave has a dedicated altar and decorated with beautiful sculptures carved by miners themselves. Another striking feature in the cathedral is the mirrors of water. The spot earned such name because of how light reflects on the water, which in turn creates a fantastic optical effect.

The underground church is actually part the Park of the Salt that features a strong cultural theme, particularly highlighting the mining industry and lifestyle as well as the rich surrounding natural resources. The site houses the Brine Museum, which showcases how salt was processed during the flourishing days of mining through old tools and structure exhibits. Inside the mine, you can also find a food hall, an auditorium and convention center as well as an atmospheric cafe called the Coffee Chamber.

An organized tour is offered to tourists visiting the Salt Cathedral. The tour lasts for an hour and is headed by an experienced bilingual guide. A section of the guided tour is called the miner’s route. As the name suggests, the tour highlights the life of a miner. If you decide to join the tour, make sure to wear warm clothes and comfortable yet sturdy footwear for the hike into the underground. The average temperature inside the cave is 14C (about 58F).

Aside from conducting regular masses and various church services, the Zipaquira Salt Cathedral is also often used for wedding ceremonies. If you like to say your wedding vows inside a salt mine, you know where to go.