Tongariro National Park is New Zealand’s first national park and is well known for its volcanic features. One of the most prominent landmarks in the park is Mount Ruapehu, which stands 8500 feet and is considered to be one of the tallest active volcanoes in the world. The national park was once the possession of the Maori tribe Ngati Tuwharetoa, until it was given as gift to the New Zealand people. 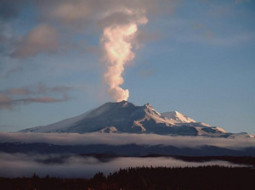 Today, Tongariro encompasses a land area of more than 79,000 hectares. It is the nearest national park to the country capital of Auckland. It is accessible from the State Highway 1 and is bordered by towns like the Ohakune and Turangi. Visitors usually access Tongariro National Park through the Whakapapa Village, situated on the western side of Mount Ruapehu.

There are three major volcanoes that occupy the middle portion of the park, namely, Ngauruhoe, Tongariro and Ruapehu. Together, the volcanoes are part of Taupo Volcanic Zone and an area called Pacific Ring of Fire. The park has earned two World Heritage distinctions. The first one is for the site’s rich Maori history and heritage and the second is for its unique volcanic landscape.

Tongariro National Park is home to a wide range of wildlife, some of which are endemic to the country, such as the kakariki (parakeet), kereru, the local pigeon, and short and long-tailed bats. The park is a dream destination for nature enthusiasts and outdoor adventure seekers. Tongariro provides visitors access to amazing landscape views, hot springs, beautiful clear lakes and active volcano craters. It is a place ideal for outdoor sports and activities like mountain biking, white water rafting and skiing. 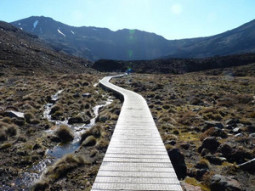 Aside from these, there are other walks that highlight the gorgeous terrain of Tongariro. You can choose from a 20-minute easy walk to a 2-hour grueling hike to volcano lookouts and waterfalls. There are also a number of paths that require overnight camping or multiple-day hiking. One prominent trail is the Ridge Track, which measures a distance of 1.2 kilometers, and begins near the Whakapapa Visitor Center. A return hike of this track is usually completed in about 40 minutes. It features a short climb through a low beech forest and rewards you with amazing views of the surrounding landscape including Ngauruhoe and Ruapehu.

Perhaps one of the most challenging activities in Tongariro National Park is climbing the almost perfect cone of Mt Ngauruhoe. This 2500-year old volcano has been quiet since the 1970’s, but it has gained new fame when it became the crucial movie setting for the Lords of the Rings film. Climbing Mt. Ngauruhoe requires good fitness as the track is not marked and the climb is quite steep.