Chiang Rai’s Wat Rong Khun is considered one of the most unique temples in Thailand. Known to many as the White Temple, Rong Khun proves to be quite extraordinary with its quirky wall paintings, demon statues, Thai angels and mythical creatures.

The Wat was a concept realized by Chalermchai Kositpipat, a respected National Artist and a devout Buddhist. What makes White Temple one of the most recognizable in the country is it tries to merge Thai art with the modern world. Thus, when you visit Wat Rong Khun, don’t expect to see a traditional temple! 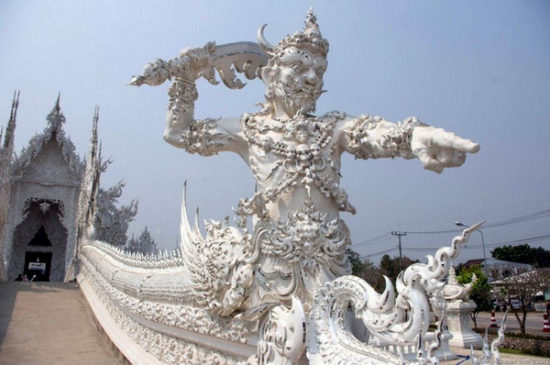 Despite the drawings of cartoon heroes, golden rest rooms and extraordinary structures – make no mistake about it – the White Temple reflects deep religious symbolism. As you explore Rong Khun’s grounds, you will soon realize Chalermchai’s perspectives on the place of Buddhist teachings in contemporary times. To symbolize the purity of Lord Buddha, Wat Rong Khun is clad with white. It also has embedded pieces of mirrors that glitter under the sun to represent Buddha’s wisdom. The temple complex also aims to show how people are swept by world temptations and bad values such as greed and desires.

Another excellent example of the temple’s strong symbolism is the threshold that comes before the main temple hall. The threshold is guarded by demons and the bridge that connects it goes over a sea of ghostly hands reaching up to the sky. The multitude of hands represents the repeated cycle of death and rebirth.

Rong Khun’s main temple hall, also called white ubosot, symbolizes the realm of Buddha and the state of nirvana. This hall has recently been completed but the rest of the buildings in the temple complex are still under construction or are being redecorated. Once the Wat Rong Khun complex is completed, there will be nine buildings that include a meditation hall and living quarters of the monks. 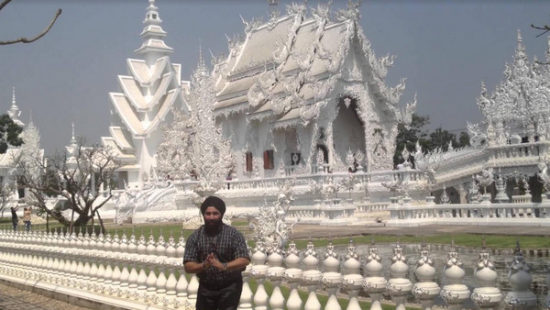 One of the highlight sections of the complex is the art gallery. Although it is smaller than the other buildings, the gallery is a must visit as it contains several of Chalermchai’s precious works. Here, you can also purchase souvenirs mostly in the forms of books, postcards and art reproductions.

Photography is prohibited within the walls of Wat Rong Khun but you can still snap photos throughout the grounds. Although it is a major tourist attraction, be reminded that the White Temple is still a place of worship and a sacred place for the Thai people. Thus, visitors are expected to maintain a respectful behavior. Wearing revealing clothes such as short skirts, tank tops and shorts within the temple grounds are deemed inappropriate. Entering the White Temple is absolutely free; however, you are encouraged to get a guide while exploring the main temple building. There are a number of guides available for hire at the entrance of the temple.

Wat Rong Khun, is about 13 kilometers outside the city of Chiang Rai. From the city, you can take a public bus that depart from platforms 7 and 8 of the old bus station. You also have the option of hiring a three-wheeled transport called a tutuk or take a songthaew (a local covered pick-up truck). The temple opens every day from 6:30 am to 6:00 pm.