If you are looking for majestic tea landscape in South Korea, the place to be is the area called Boseong. Located on the southern coast of the Korean peninsula, within the province of Jeollanam-do, Boseong is known for its green tea, locally called yubi-cha. It is considered by many to be the best type of tea in the country due to its outstanding taste and scent.

The Boseong tea plantation area has been in existence since the Japanese occupation of the country. It boasts a long history and rich traditions related to tea growing and preparation. Boseong is at its most spectacular look during spring when everything in nature comes alive and is bursting with vivid colors. Just close to the tea fields is the small historic town of Beolgyo, where visitors can learn more about the history of wars and colonialism in the country. 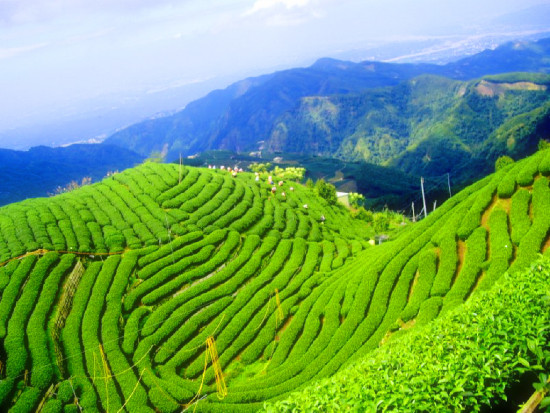 Out of the three main plantations in the Boseong area, Daehan Dawon is the most famous one. It routinely attracts domestic and international visitors but it also functions as a fully-operational plantation that produces 40% of the nation’s green tea products. Daehan Dawon is incredibly scenic, and all around you will see neatly trimmed tea hedges that adorned multitudes of hills. Daehan covers more than 560 hectares of hillside and fields. This is the largest and oldest tea garden in Boseong.

The most popular tourist activity in Daehan is the stroll up to a road that leads to the main plantation area. This iconic path is referred to as the Boseong Cedar Road, as it is lined up by tall cedar trees that can reach to up to 20 meters in height. It is also often referred to as one of the most scenic roads in South Korea. If you walk down this road for 300 meters, you will eventually encounter a cool marketplace that mainly sells local products. 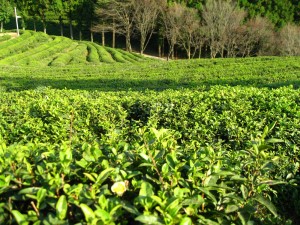 Go past the market and go around a small pong to get to the administrative office building. This section is also populated by various restaurants and coffee shops. Make sure to bring a camera during this hike as there are plenty of amazing photo opportunities. After the hike, get yourself some favorite green tea ice cream, a perfect way to cap off the experience.

The Daehan Dawon Tea Plantation is open year round. During summer, which is from March to October, the hours are 9:00 am to 7:00 pm. In winter, from November to February, it opens from 9:00 am to 6:00 pm. There is a free parking at the plantation, but there is a required admission fee for visitors. 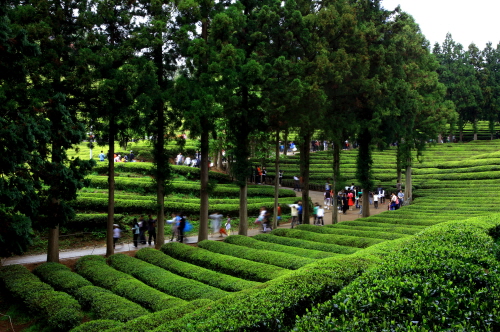 The best time to visit Boseong and the Daehan Dawon Plantation is in May as the yearly Dahyangje Tea Festival is celebrated at this time. Aside from driving your own vehicle, the most common way to reach Boseong is to take the bus from Seoul, although the route is not direct. From the capital, you will need to take a bus to the city of Gwangju. You will then change at the intercity bus terminal, and take another bus directly to the city of Boseong.