The incredible Italian Island of Capri has always been considered as one of the best islands in Europe by a number of travel experts. Just south of Naples, the island is known for its fabulous style and fashionable spirit.

One spot on the island that surely represents these qualities is Capri Piazzetta. Also known as the Piazza Umberto I, Piazzetta is the beating heart of Capri. It was once a market square where fresh produce and fish were sold vigorously. However when Raffaele Vuotto tried to set up tables outside his bar in 1938, his creative idea launched the piazza’s reputation as the most fashionable meeting point in all of Capri. Locals and holidaymakers tend to flock to the piazza to socialize, relax and people-watch.

Piazzetta has a mix of newsstands, a tourist information office and architectural masterpieces. But the real treat is the lovely pavement cafes, which are strategically located on each corner of the piazza. Sipping coffee while watching the world go by has never felt so peaceful and glamorous! What adds to the excitement is this public square attracts the rich and famous including Hollywood stars and world celebrities. It’s highly possible that you will see some of them hanging out in some of the cafes, while the nearby paparazzi shoot away with their cameras.

One of Piazzetta’s outstanding landmarks is the Church of Santo Stefano built in the 17th century. Getting to this former central cathedral involves climbing a flight of steps. The nearby Cerio Museum situated inside the 13th century old Palazzo Arcucci is also a noteworthy stop. Other architectural landmarks in the square include the four famous bars surrounded by 17th century palaces. 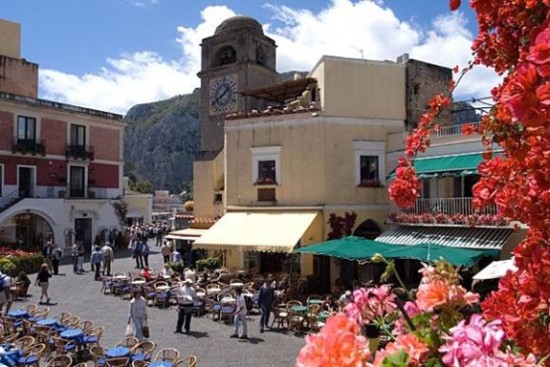 One of the most notable palaces is the Cerio Palace, which was originally built during the Angevin era in the 1300’s. Another distinguished landmark in the piazza is the historic Torre dell’Orologio. This clock tower is the original bell tower of Saint Stephen’s Cathedral. What makes this tower also extra special is because its building materials date back to ancient Roman times – specifically during the reign of Emperor Tiberius. When you walk towards the southeast portion of the square, you will come across the impressive Town Hall. This structure also boasts a long and dramatic history as it used to be an Episcopal Palace, and had undergone restoration in the 1700’s.

Once you’re done with your coffee and some architectural sightseeing, you can head out to the chic street of Corso Vittorio Emanuele. Here, you will indulge your shopping craving as the street is lined with many beautiful shops and boutiques featuring designer fashion items and accessories. 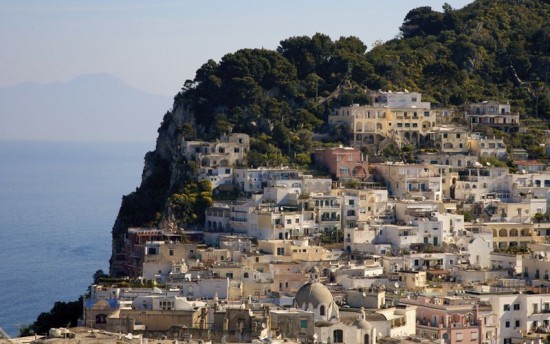 Capri Piazzetta can be reached from the port of Marina Grande by riding the Funicular train transport or a cableway. The travel time is not more than 3 minutes but the journey is extremely scenic. It gives you stunning views of the island’s landscapes. This is the perfect time to capture postcard-worthy pictures of Capri. After the train ride, you will then get off at the picturesque terrace around the corner of the square. If you are coming from Anacapri, you can take a bus that goes to the main terminal, which is only a few meters away from the piazza.