Adrian owns and operates the neighborhood institution that has been run by his family since 1959. At Davila’s, the signature dishes, such as underground Mexican-style barbacoa, trace their culinary roots back to the vaqueros, the Latin cattle herders who once roamed the plains of Texas and Mexico. These resourceful cowboys may have been the first ‘pitmasters’— they dug actual pits to slow-smoke whole animals into tender succulence, and infused the local ingredients with the pungent, bright flavors of the Iberian Peninsula.

Today, Davila keeps the tradition of the past alive in his restaurant, in the pages of his cookbook, Cowboy Barbecue: Fire & Smoke from the Original Texas Vaqueros, and he’s sharing one of the most recognized street tacos in the Americas with you — Tacos al Pastor. The recipe has its roots in trompo, which is the meat you see being sliced from a rotating vertical skewer. Lebanese immigrants brought the shawarma-style to Mexico, and in Greece you will find a similar recipe in a gyro. Both traditionally use lamb meat, hence the name, but in Mexico and South America al pastor is made with juicy pork. 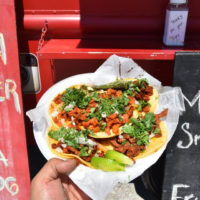